We continue with the second leg of our journey and this time we start in Guinea-Bissau before moving through Guinea and then on to Sierra Leone.

Guinea-Bissau is bordered by Senegal to the north and Guinea to the south and east, with the Atlantic Ocean to its west.

At 36,125 square kilometres (13,948 sq mi), the country is slightly larger than Belgium. The terrain is mostly low coastal plain with mangrove swamps rising to forest-savanna in the east. Its monsoon-like rainy season alternates with periods of hot, dry winds blowing in from the Sahara meaning there is little temperature fluctuation. Rainy season falls between June and October, whilst from December through April the country experiences drought. 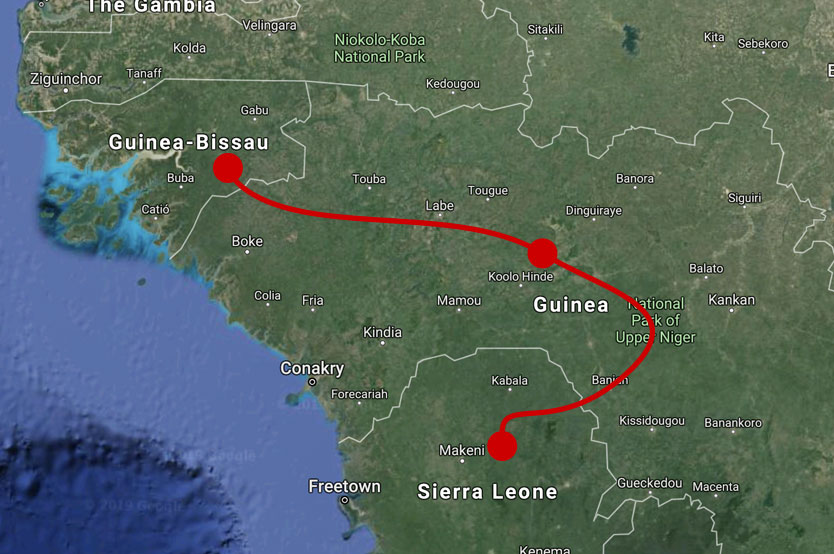 Considering the rainy season, the Land Cruiser 76 Hardtop would be the perfect vehicle for this leg of our journey.

Legendary is a much overused word but, in the case of the Land Cruiser 70 series (LC 70), it is completely justified. More than 30 years on from its debut, the LC 70 can still claim to be the most rugged, most reliable vehicle for handling the harshest conditions and toughest situations which life can throw at it.

The LC 70 is the standard fleet vehicle for many front-line agencies who demand the ultimate in dependability. TGS has delivered many hundreds of LC 70 to this region of West Africa. Customers can trust this model to deliver unprecedented performance.

For vehicles traversing precarious and muddy conditions, differential locks provide an extremely useful and necessary capability. This video explains the science behind differential locks and this is the link to the accessory that our expert workshop technicians fit to the LC 70. In addition to this we recommend the fitting of Recovery Points as well as a bull bar and winch to assist in situations where recovery is required.

Passing from Guinea-Bissau to Guinea there is little change to the scenery and lie of the land.

Guinea shares a border with Senegal on the north, Mali on the northeast, Ivory Coast to the east, and Liberia and Sierra Leone to the south. The nation forms a crescent as it curves from its southeast region to the north and west, to its northwest border with Guinea-Bissau and southwestern coast on the Atlantic Ocean.

Guinea is divided into four main regions: Maritime Guinea, the cooler, mountainous Fouta Djallon that run roughly north-south through the middle of the country, the Sahelian Haute-Guinea to the northeast, and the forested jungle regions in the southeast. Guinea's mountains are the source for the Niger, the Gambia, and Senegal Rivers, as well as the numerous rivers flowing to the sea on the west side of the range in Sierra Leone and Ivory Coast.

TGS Technical Training team have recently paid 2 visits to Guinea in order to provide training for G.I.Z. the German Government Development Agency. G.I.Z. asked us to conduct a driver-training course in Mamou, Guinea and, having already provided training to other GIZ teams in neighbouring countries, we were delighted to see for ourselves the fleet challenges which GIZ faced in Guinea. The following areas of concern were highlighted to us: environmental constraints, driving difficulties in harsh terrain, driving behaviour and best practices and key road safety principles. You can read more about these training event here.

Sierra Leone is located on the southwest coast of West Africa. The country is bordered by Guinea to the north and east, Liberia to the southeast, and the Atlantic Ocean to the west and southwest.

Sierra Leone has a total area of 71,740 km2 (27,699 sq mi) which is similar in size to Austria. The country has four distinct geographical regions. In eastern Sierra Leone the plateau is interspersed with high mountains, where Mount Bintumani reaches 1,948 m (6,391 ft), the highest point in the country.

The centre of the country is a region of lowland plains, containing forests, bush and farmland, that occupies about 43% of Sierra Leone's land area. The northern section of this has been categorised by the World Wildlife Fund as part of the Guinean forest-savanna mosaic ecoregion, while the south is rain-forested plains and farmland.

In the west, Sierra Leone has some 400 km (249 mi) of Atlantic coastline, giving it both bountiful marine resources and attractive tourist potential. The capital Freetown sits on a coastal peninsula, situated next to the Sierra Leone Harbour, the world's third largest natural harbour.

The climate is tropical, with two seasons determining the agricultural cycle: the rainy season from May to November, and a dry season from December to May. The average temperature is a warm 26 °C.

One of TGS’s team members enjoys a special link with Sierra Leone.

James Bruzon first visited Sierra Leone in 2006 as part of a TGS Technical Training event team. Upon his return to Gibraltar, he set up the charity “Action 4 Schools - Sierra Leone” which focuses on improving primary schools and providing water wells in Sierra Leone.

You can read the full story of Action 4 Schools here, We wish James and the charity continued success for many years to come.

That brings an end to the second leg of our journey. Next month we move on to Liberia, Ivory Coast and Ghana where we will encounter more tough conditions and where we will be using the Land Cruiser Prado.